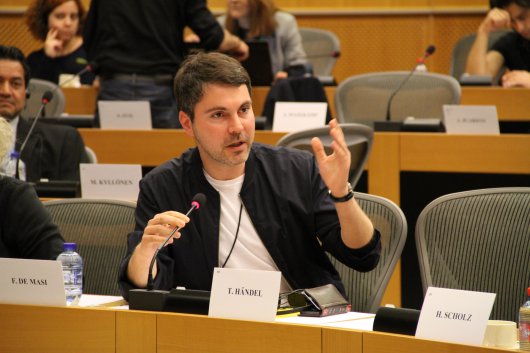 Over the weekend, German news magazine, Der Spiegel, reported that over many years EU member states such as Luxembourg and the Netherlands have sabotaged attempts to counter profit shifting to low tax jurisdictions via 'patent boxes' under the political leadership of current President of the European Commission, Jean Claude Juncker, and Eurogroup President, Jeroen Dijsselbloem.

Vice President of the European Parliament's Special Committee on Tax rulings and other measures similar in nature or effect (TAXE), Marisa Matias, commented: "The TAXE committee was just a first step. The evidence shows that we still know almost nothing about these tax arrangements, and this has a huge impact on the lives of European people. We shall continue pushing for a proper inquiry and fight for transparency, justice and democracy."

GUE/NGL is again calling for a full committee of inquiry to investigate the tax avoidance – a call which had been blocked by the larger political groups EPP and S&D – at the early stage of the Luxleaks revelations. At the very least, GUE/NGL calls for the mandate of the TAXE committee to be extended to enable more thorough investigations. In addition, GUE/NGL is preparing a lawsuit at the European Court of Justice to gain access to relevant documents.

Shadow Rapporteur for the TAXE committee, Fabio De Masi, explained: "The recent revelations demonstrate the need for a more substantial inquiry into what Jean Claude Juncker himself called 'EU leaks'. Now the grand coalition in the European Parliament has to end its resistance to a prolongation of the mandate of TAXE. The European Commission must grant access to all documents and minutes of the European Council working groups on tax matters. The European Parliament needs time to air the dirty laundry!"

De Masi continued: "It is beyond doubt that Jean-Claude Juncker and Jeroen Dijsselbloem are more like the godfathers of the tax cartel than honest brokers. They intervened on a political level against restrictions on abusive tax planning. And at the same time they have pushed austerity measures amidst Europe's current struggle with the refugee crisis and chronic economic depression. This reaffirms GUE/NGL's position that Juncker and Dijsselbloem are ill-suited to represent the European Union."

GUE/NGL Coordinator for the TAXE committee, Miguel Viegas, added: "Since the first moment, we have stated that the EU's economic framework would have a negative impact on the member states by increasing tax avoidance and erosion, as well as profit shifting. The Luxleaks scandal and the shocking recent revelations are proof that the tax rulings that benefited several multinational companies harmed the member states in the order of millions of euros. It is crucial to have an extension of the TAXE committee's mandate in order to thoroughly investigate all the cases, to understand the consequences for the European people and to take the required measures to penalise all the organisations responsible."