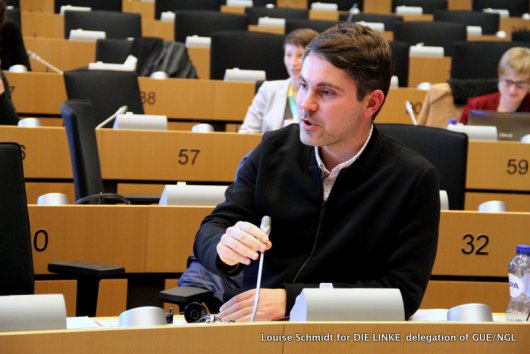 The European Parliament's special committee on tax rulings and other measures similar in nature or effect (TAXE) will hold the constitutive meeting of its second leg today in Strasbourg. Later this morning, TAXE coordinators will start discussing the work plan and roadmap for TAXE2.

GUE/NGL TAXE coordinator Fabio De Masi comments: "Time is up for weak compromises. TAXE needs to get tough on tax havens in the EU and the political figures protecting them. Commission President Jean-Claude Juncker has to come back to the committee to clarify the contractions from his first hearing in TAXE. The same goes for Eurogroup President Jeroen Dijsselbloem. Both have obstructed a proper regulation on patent boxes, and the Netherlands will be heading the Council as of January."

GUE/NGL TAXE shadow rapporteur Miguel Viegas adds: "The first battle is on finally getting full document access for elected members of Parliament. The intolerable conditions of the reading room – worse than for the consultation of secret TTIP documents – have to end. There will be no tax justice without transparency and proper debate. If the Commission and the Council do not move, we will fight for transparency at the European Court of Justice. "

Fabio De Masi concludes: "Policy-wise it is up to the Commission to finally propose serious measures to rein in corporate tax avoidance and tax multinational corporations where they actually do business. The proposed anti-BEPS (Base Erosion and Profit Shifting) directive is a start, but will not sufficiently curb tax dumping by the EU's notorious tax havens. As an interim step, the Interest and Royalties Directive needs to be revised to allow member states via withholding taxes to ensure a minimum level of taxation for interest and licence payments. This is legally possible according to the Council's own legal service."