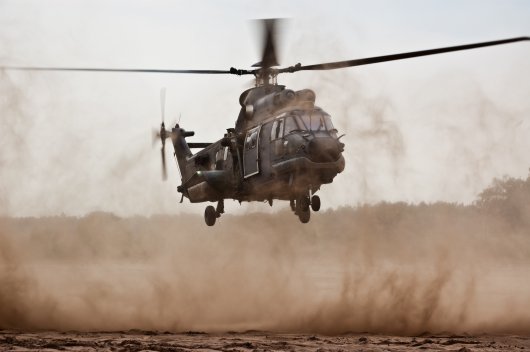 The article was published first at EurActiv.com on December 12rd.

The Finnish vice president of the European Commission, Jyrki Katainen, is not known for his generosity. The Commissioner for employment, growth, investment and competition is an ardent defender of the EU’s stability and growth pact, which demands rigorous household discipline from Member States.

Only when it comes to military spending, does Katainen look the other way. After Brexit and the election of Donald Trump, the European Commission, flanked by France and Germany, has been pressing for a new military role of the EU as a “peace power” in its “back yard” - Eastern Europe and Northern Africa.

For this purpose, around 90 million euros for armament research shall be channelled into the defence fund until 2020. This would of course, according to the Commissioner for Industry Elżbieta Bieńkowska, benefit middle class entrepreneurs. It seems like there is not a single EU initiative of late that doesn’t benefit middle class entrepreneurs. Starting from 2020, the fund will then annually receive 500 million euros. Katainen especially wants to see increased military spending on drones, warships, cyber technology, counter-terrorism and on securing the EU’s external boarders from refugees.

Katainen acts here as a true “Euro-Fighter”. Talking to the Financial Times, the Commissioner emphasises that the defence union is about the principals of the common currency, liberty and liberal democracy. The euro is no longer only being defended at the European Central Bank (ECB), but also at the Hindu Kush.

The Commissioner can think of two ways to finance this project.

First: European Defence Bonds. These could be used by Member States to jointly tap into capital markets, i.e. into rich and institutional investors. In the medium term, these “shellproof bonds” would be backed by a European treasury or a construct similar to the European Stability Mechanism.

European Defence Bonds are basically equivalent to Euro Bonds. The latter, however, have always been rejected by the German government as they would lower the cost of public borrowing for Member States on the periphery by creating a joint Eurozone liability. Also the concerns raised by the German constitutional court, according to which a joint liability would require serious parliamentarian control of the EU budget, seem to no longer be an obstacle. For years, EU armament projects have been dealt with via the European Defence Agency in dubious shadow budgets outside of parliamentary control.

Second: Investments in armaments shall be partially exempted from the deficit criteria of the stability and growth pact. This is something economists who have criticised the EU’s austerity policies have been demanding for years. However, they envisage investments in education and infrastructure which will create long term wealth for future generations. This is why they should be exempted from the deficit criteria or why their costs should be split across several fiscal years.

In the short term, the European Investment Bank (EIB), which already emits EU bonds for infrastructure investment, is supposed to step in. Regarding the type and volume of investment, the bank is however faced with certain constraints. It is meant to invest in infrastructure projects that support the internal market and its investment volume is constrained by its equity capital. At the moment, the bank can invest 90 billion euros annually.

Increases in the EIB’s capital are not governed by the stability and growth pact. A loophole that could have already been used for sensible, public investment. But the Commission apparently prefers to safeguard private investment in public infrastructure with tax payer’s money, as is being done with the Juncker Plan.

EIB President Werner Hoyer is not amused by Katainen’s plans. Creditors of the EIB, mainly life insurances and investment funds, are not allowed to invest in armaments. Hoyer is also worried about a softening of the stability and growth pact. But again, Katainen has the solution. The new European arms would be more innovative than your typical military gear (like artillery or tanks) and would be put to civilian and military use (Dual Use). This would then be covered by the EIB’s mandate.

The moral of the story? The EU likes to paint itself as a peace project. But EU projects all too often include a significant amount of military upgrading, and increasingly so. The austerity dogma is thrown overboard when it comes to serving the interests of the military-industrial complex in Europe. Money for military upgrading in the EU is not cut, but splashed out.

To think, in the wake of the refugee crisis - a product also of EU foreign policy - of finally investing in schools, hospitals and housing, is asking too much of Katainen. After all, his imagination is also limited.