As progressive MEPs continue to campaign against TTIP and CETA, MEP Fabio De Masi speaks to Portal to outline opposition to the trade deals. 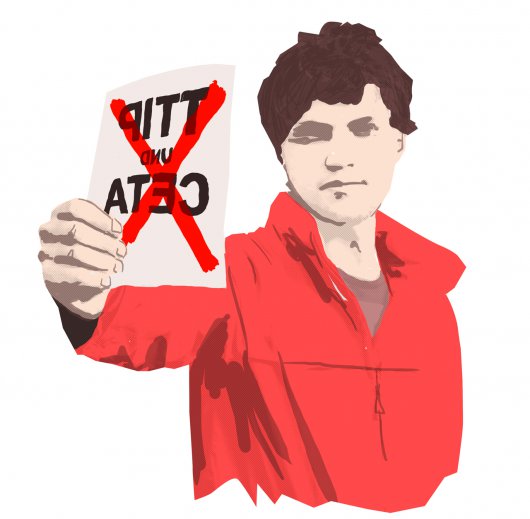 Controversy around the EU-US Transatlantic Trade and Investment Partnership (TTIP) and the EU-Canada Comprehensive Economic and Trade Agreement (CETA) deals continues to grow, with progressive members of the European Parliament expressing their opposition to these transatlantic free trade agreements. Questions over Europe accepting the TTIP agreement also remain, although MEP focus is now on the ratification of the CETA agreement.

One such MEP, Fabio De Masi, a member of the European United Left/Nordic Green Left (GUE/NGL) European Parliamentary Group is steadfast in his opposition of the deals that the European Commission, alongside the US and Canadian governments, continues to back. On 6 September, a meeting of the Progressive Caucasus in the parliament saw MEPs from the Progressive Alliance of Socialist and Democrats (S&D), GUE/NGL and the Greens/EFA groupings gather to focus on issues around TTIP and CETA, together with a number of external speakers.

As one of the MEPs present, De Masi, alongside other parliamentarians, emphasised his continuing opposition to TTIP and CETA, warning that the economic case for the deals is weak, and – perhaps more importantly – of the potential corrosive impact the agreements could have on democracy on both sides of the Atlantic. Sitting down with Portal, he answered a range of questions on the developments around free trade today, and whether it is the answer for the economic challenges that Europe faces.

In the wake of the apparent difficulties around TTIP – what are the implications for the CETA agreement?

What some governments are trying right now – the French government, and the Social Democrats in Germany – is saying that TTIP is dead, we have presidential elections in the US, but CETA is a good agreement – it’s okay.

I personally don’t share this position as CETA is even more ambitious in some aspects, and I have problems with such ambitions. For example, CETA entails a negative list. This means that everything that is not put on that list is subjected to the agreement. This is a huge risk as policy makers may not foresee today new technologies or markets that may emerge tomorrow and will require regulation. The protection of public services is very limited. CETA is a living agreement. It will grow like cancer, extend to new areas and hamper seriously democratic decision making.

Second of all, a lot of US and European corporations have subsidiaries in Canada, and would be able to use the dispute settlement mechanism Investor Court System (ICS) over there, and we still have concerns here despite the reforms that have been allowed.

For example, an association of German lawyers has clearly said that ICS in this regard does not adhere with standards of public law, that there are too many conflicts of interests involved. For example, the arbitrators are still not paid by a public court, they make money from every court case. All these issues are not yet solved.

Thirdly, we don’t see any economic rationale. What we lack in Europe is internal investment and growth. When we had the creation of the internal market, the Cecchini report promised growth and jobs, but it never materialised. When North America agreed the NAFTA agreement, they promised the same. It never materialised.

We are seeing that the traditional free trade story does not hold true anymore; I don’t think this is something we need to advance further.

MEPs have stressed that larger corporations stand to benefit from TTIP/CETA, do you feel there is any potential for SMEs to also benefit from these agreements?

A lot of people talk about free trade as if it will create open markets, enhanced competition and higher productivity, along with more investment. Free trade even tends to favour big monopolies. Free trade is like putting a tiger in a cage with a chicken and saying; ‘let’s compete’. We all know the result; the tiger will eat the chicken.

For highly developed regions like Canada or the EU, there is weak economic rationale. We have already fairly unhampered trade between the EU and Canada, but not everything is being traded as we have geographic proximity issues when it comes to things such as agricultural products, which face natural transportation costs. I think CETA is really about the investment part. This will grant corporations a strong tool to attack democratic decision making, introducing corporate capture of democratic decision making. SMEs will not be in any position to capitalise on that. I have been a business consultant myself and none of the SMEs I ever dealt with would have been able to look to something like the Investor-state dispute settlement (ISDS).

These deals will not benefit SMEs. In politics there are two things politicians have to do to succeed: be pictured with a little child, or say that policies will be good for SMEs. Such deals will always be sold in such a way. Yet we see SME trade associations saying they are against free trade deals, as they fear large monopolies will enter and then capture the market.

While there is clear political opposition in Europe – how are you co-operating with colleagues on the other side of the Atlantic who are focusing on these deals?

In the United States even Wall Street politicians such as Hillary Clinton are expressing opposition to TTIP. We have an exchange with concerned senators and congressmen and women in the US, who provide us with information that we can then use to double check the facts put forward by the negotiators.

This is important – opposition is not about being anti-US or anti-Canadian, there are sometimes even higher standards across the Atlantic. For example, under banking regulation foreign banks with subsidiaries in the United States are required to hold much more capital than in Europe, something the US government argues for – legitimately. Because the supervision of those banks rests with the EU while US taxpayers have to bear risks.

Jonathan Hill, the former commissioner for financial markets, told me that the commission wants to lower that US standard under TTIP. EU corporations stand to benefit from lower standards in the US, and this is why it is a common struggle and, for example, why we are working with trade unions in the US.

We have seen a number of different political groupings come together in the European Parliament to discuss these issues. When it comes to increasing engagement with your views amongst the other EU institutions, how can the views in parliament be strengthened in the debate?

Essentially, the commission has taken the position of taking charge of the negotiations and then showing the final result to MEPs, telling them to approve the agreement, as otherwise, after years of negotiations, the potential of a deal will collapse. There is a view amongst some in the European Parliament that we should have greater competences. However, I am very happy if national parliaments can vote on this agreement. Not every citizen can buy a train ticket to get to Brussels to take part in a demonstration against these trade agreements.

For the Commission to apply a preliminary application of CETA is over-riding national parliaments. It is unacceptable to over-ride national parliaments while member states bear the risk of those agreements and CETA is clearly a mixed agreement as mandated by the council.

How are you working to enhance your links with parliamentarians at the national level?

Many of the national parliamentarians are encouraged by our example at the European level. Tonight we have MEPs from different political groups working together to stop this agreement. This should encourage all those MPs at the national level who have a problem with TTIP or CETA to raise their voice.

If we push through agreements that directly have a negative impact on the lives of European citizens, the electorate will remember who voted for these agreements.

What implications do the difficulties over TTIP or CETA indicate for the UK after the vote for Brexit and as it moves to establish trade deals with other countries around the world?

As we can see trade deals are enormously difficult to agree, and indeed have become an EU competency. The UK does not even have the human resources required to negotiate these deals. These deals get complex and, indeed, when it comes to elections, messy. Even the United States, despite the Anglo-American ties, is not eager to deal with the UK – their focus is on access to the European market.

While ministers from France and Germany are suggesting the TTIP negotiations have failed, do you feel that this actually reflects political reality?

It may well reflect reality, especially with the US presidential elections. However, I think such comments may even be a way to take away attention from CETA. It raises the focus on TTIP while pushing on with CETA. This is very dangerous. I have even heard voices from the US administration suggesting the country does not even need TTIP because CETA has very favourable contents which subsidiaries in Canada can take advantage of.

The World Intellectual Property Organization (WIPO) advises that patent information (the technical and legal information contained in patent documents that are published periodically by patent offices) for SMEs is incredibly useful for a number of reasons. ‘Probably the most important one,’ the organisation states, ‘is that patents are a unique source of technical information which SMEs may find of great value for their strategic business planning. Most inventions are disclosed to the public for the first time when the patent (or, where the law so provides, when the patent application) is published. Thus, patents provide a means of learning about current research and innovations often long before the innovative products appear on the market.’

Important insights for an SME that may be used to, for example, keep abreast of the latest technologies in a given field of expertise; identify and evaluate technology for licensing and technology transfer; avoid unnecessary expenses in researching what is already known; or identify alternative technologies can be obtained via the technical information contained in patent documents.

WIPO also explains that, ‘from the point of view of the commercial strategy of your enterprise, patent information would help to: locate business partners, locate suppliers and materials, monitor activities of real and potential competitors, and identify niche markets. Finally, the information contained in patent documents could also be used by SMEs to: avoid possible infringement problems, assess patentability of your own inventions, and oppose grant of patents wherever they conflict with your own patent.’

Explaining that a patent document includes the full description of how a patented invention works, and the claims which determine the scope of protection as well as details on who patented the invention, when it was patented and reference to relevant literature, WIPO also reveals that ‘about two thirds of the technical information revealed in patents is never published elsewhere and the entire set of patent documents worldwide includes approximately 40 million items. This makes patent information the single most comprehensive collection of classified technological data.’

The benefits of patent information are thus clear, and, as the UK government advises, given that global trade in IP licences is worth more than £600bn (~€706.4bn) a year, ‘it is crucial that IP advice forms an intrinsic part of an SME’s business model, taking into consideration the potential to commercialise and market the innovation’.